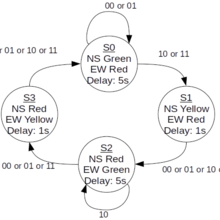 Traffic light simulation is a classic text book problem used to demonstrate a finite state machine. A FSM is a system with finite states, finite inputs, finite outputs. It has a known number of states, inputs, and outputs. You can join team Mealy or team Moore, sometimes it matter, either way everybody wins, and you can switch teams in most cases. The state machine implementation in this project is an example of a Moore machine. Output depends on the current state and the next state depends on current state and input.

This traffic light simulation will simulate two one-way streets. One street has priority (north to south) and will stay green unless there’s a reason to switch.

I think its easier to start from a state diagram, meale or moore. Then build the state table, then code. 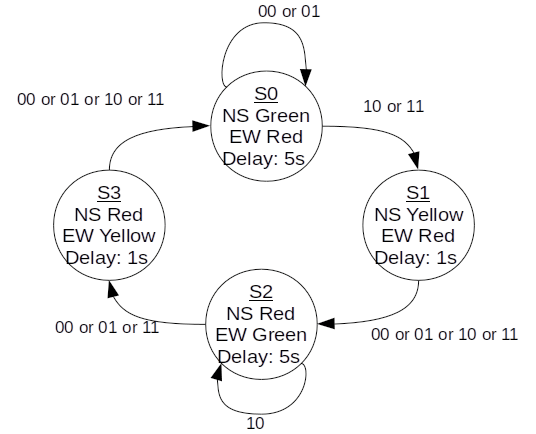 Its common to see a state machine implemented as “if” or “switch” case statement. Another approach is to use a struct. using a stuct condenses the state machine logic quite a lot and makes debugging or adjusting states easy.